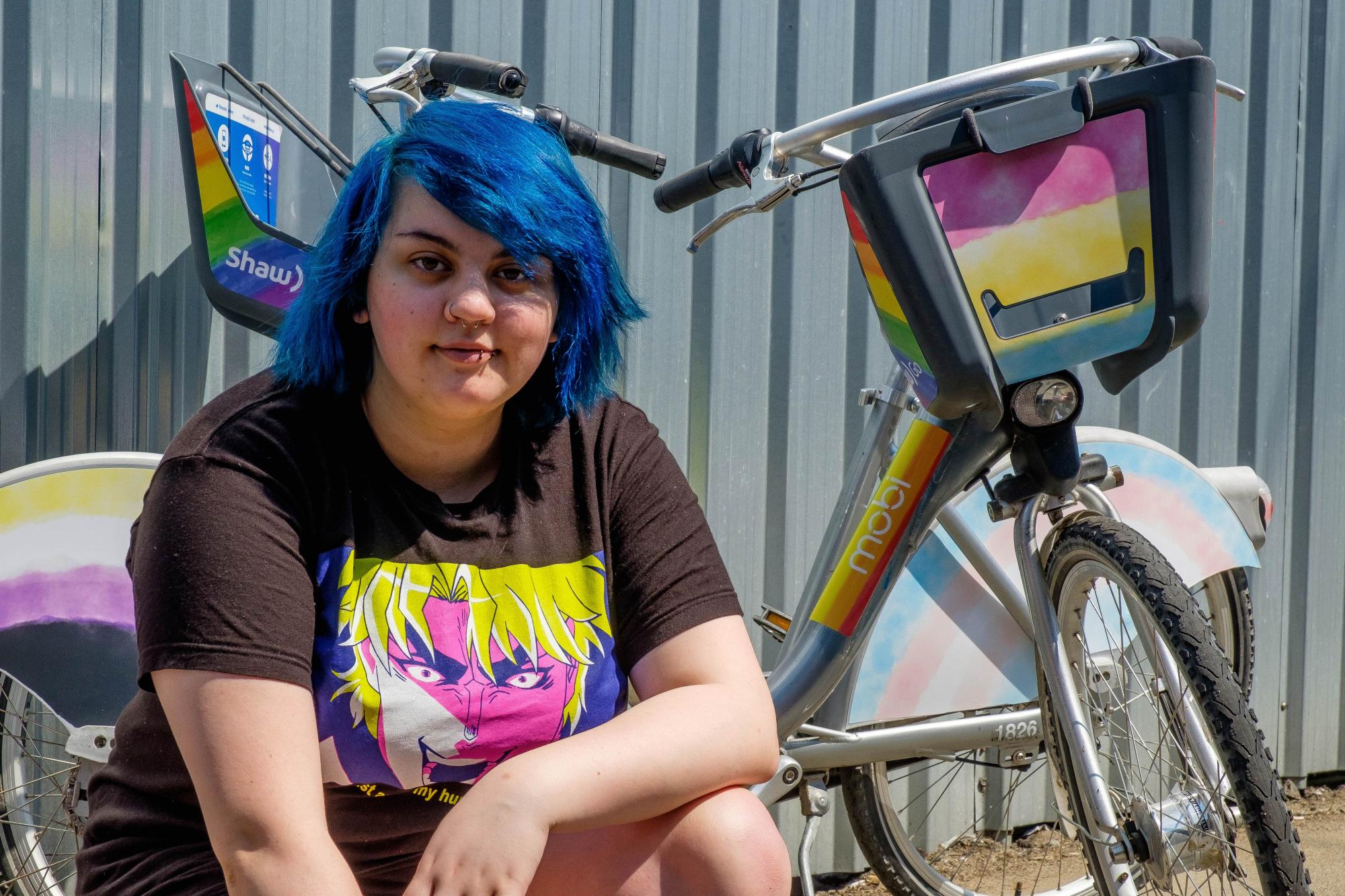 Mobi by Shaw Go is celebrating the LGBTQAI2S+ community with the release of new Pride Bikes. There are 10 of these awesome, rainbow-wrapped bikes – whose designs are inspired by Kai Davies, a nonbinary designer who is also part of our customer service team – so keep your eye out and #RideWithPride.

We spoke with Kai Davies to learn more about their identity and what inspired this year's designs.

We would like to acknowledge that the Pride bikes do not highlight all of the many identities that people can align themselves with. A great resource for learning about the different LGBTQAI2S+ identities is the QMUNITY Resource page.

Can you tell us a bit about yourself?

My name is Kai! I use they/them pronouns, and I identify as nonbinary, demisexual and panromantic! I enjoy video games, art, healthy debates, and music of all kinds.

Demisexual was not one of the flags I highlighted on the bike designs this year, so I’ll give a short explanation -- it essentially means that sexual attraction doesn’t develop before extremely deep and strong emotional and romantic bonds have formed. It is included in the asexual spectrum of identities.

What inspired the design for this year’s Pride Bikes?

I wanted to make a design that I felt represented my identity really well, but then I felt like something was missing. So I made a second one to shed some light on other identities while I’m at it!

The flags that represent my identity that I’ve highlighted on our bikes this year are the nonbinary flag, the transgender flag, and the pansexual flag. The nonbinary flag (yellow white purple and black) represents genders that are outside the typical “male” or “female” feeling. It’s not a third gender, or somewhere between male and female, but rather a broad spectrum entirely outside of those. Yellow and purple colors were chosen for the nonbinary flag as they are typically considered to be gender neutral. The transgender flag (blue pink and white) represents anybody that does not identify with their birth gender, binary or not. The white stripe on the transgender flag actually represents nonbinary identities! The pansexual flag represents those that choose their partners based wholly on reasons other than their gender. Gender plays zero part in who you are attracted to if you are pansexual!

The other design includes the progress flag, which highlights POCs, transgender people, and intersex people, as well as having the traditional rainbow. Transgender POCs are the foundation of why we are able to express our pride openly today, and they are also the target of most crimes against LGBTQAI2S+ folks. It’s important to give representation to them above all else. This version of the flag also includes intersex (the yellow segment with the purple circle.) Intersex people are born with both (either whole or partial) sets of reproductive organs, and are often surgically assigned a gender they may not even have the hormones to represent. The other two flags on the bike represent WLW and MLM (women loving women, and men loving men) as those identities are commonly generalized to just “gay” and deserve more of a direct spotlight. The WLW (or commonly referred to as lesbian) flag is the pink and orange toned one that resembles a sunset, and the MLM (or gay man) flag is the greenish blueish one that resembles an ocean.

Unfortunately, there isn’t enough space on the bikes to highlight the many other identities that people can align themselves with. A great resource for learning about the different LGBTQAI2S+ identities is the QMUNITY Resource page.

Where do you draw your inspiration from when creating art?

Typically from my friends who will group call with me while we all draw, or music that I’m listening to. Sometimes games I’ve recently played end up influencing me more than I realize too. Oftentimes I just end up feeling in the mood to create something, and let the art flow freely.

What is the main message of your work?

LGBTQAI2S+ people are real and we’re out here just trying to get by like everybody else! I also figured that seeing these pride flags on bikes may be some people’s first time seeing these flags, or at least on something other than a mass produced t-shirt in the month of June -- so that’s cool too.

Please respect and care for any LGBTQAI2S+ person you know, and those that you don’t know. If you see an LGBTQAI2S+ person being harassed and feel comfortable stepping in to dissolve the situation, please exercise your privilege and do so! Speak up, but not over. Always amplify the voices of actual LGBTQAI2S+ people, instead of simply speaking for them. Everyone’s experiences and preferences are different.

Support indigenous peoples! Even if all you can afford to do is be kind and spread awareness of their struggles. LGBTQAI2S+ indigenous peoples are disproportionately more affected by hate crimes and rejection.

Two-spirit is a gender identity exclusive to indigenous peoples, and that identity has been oppressed by colonizers and erased by assimilation for many many years. For more information on two-spirit identities, please visit: https://lgbtqhealth.ca/community/two-spirit.php

I would also like to give a shoutout to the Trevor Project who have been helping LGBTQAI2S+ folks and spreading awareness/education since 1998. The Trevor Project is the leading national (USA) organization providing crisis intervention and suicide prevention services to lesbian, gay, bisexual, transgender, queer & questioning (LGBTQAI2S+) young people under 25.

They also have some resources for those outside of the USA, found here.

What’s the best piece of advice you’ve been given?

If at first you don’t succeed, try, try again. Originally said by Robert the Bruce, king of Scotland, and definitely not to me, but it still lives rent-free in my mind and applies to quite literally everything one can do in a day.